The fore limb of toad is formed by the combination of some small and large, bones. The description of these bones is given below: 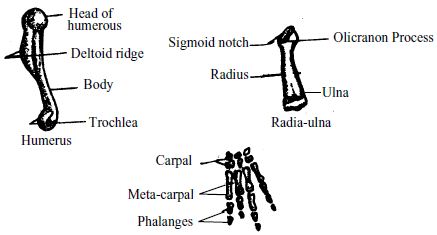 a. Humerus: The upper most bone of the forelimb is called the humerus. It is long and slightly bent. Both ends of the bone are stout. A ridge called the deltoid ridge is found on the upper of the humerus. The head of the anterior part of the bone is round. With this head, the humerus remains attached to the glenoid cavity of the pectoral girdle. At the other ends of the humerus, lies a rounded bone mass. It is known as the trochlear process. It helps in attaching itself to the next bone.

b. Radia-ulna: The middle bone of the forelimb of toad is the radia-ulna. Actually, this bone is formed by a fusion of two bones the radius and the ulna. At the junction of the two bones there lies a longitudinal mark. The bone in the inner side is known as radius and the one located outer side is known as the ulna. In front of this bone, there is a carve known as the sigmoid notch. The trochlear of the humerus is jointed there. Near the notch, there is a projection called olecranon process.

c. Carpal: The carpal is formed by the six small bones of the wrist. With three bones in each row, a total of six bones are arranged in two rows. The posterior end of radio-ulna is joined with the carpals.

d. Metacarpal: The palm is formed with four narrow bones. These bones are called metacarpals. They bear the weight of the palm of forelimb and remain attached with the phalanges.

e. Phalanges: In the forelimbs of toad, there are four fingers. The finger-bones are called phalanges. There are two phalanges on the first and second. fingers and three on the third and fourth fingers.