Earthworms have long cylindrical body. The body is divided into more than hundred short segments which are similar (metameres about 100-120 in number). The dorsal surface of the body is marked by a dark median mid dorsal line (dorsal blood vessel) along the longitudinal axis of the body.

The ventral surface is distinguished by the presence of genital openings (pores). Anterior end consists of the mouth and the prostomium, a lobe which serves as a covering for the mouth and as a wedge to force open cracks in the soil into which the earthworm may crawl. The prostomium is sensory in function. The first body segment is called the peristomium (buccal segment) which contains the mouth. In a mature worm, segments 14 – 16 are covered by a prominent dark band of glandular tissue called clitellum. Thus the body is divisible into three prominent regions preclitellar, clitellar and postclitellar segments (Figure). 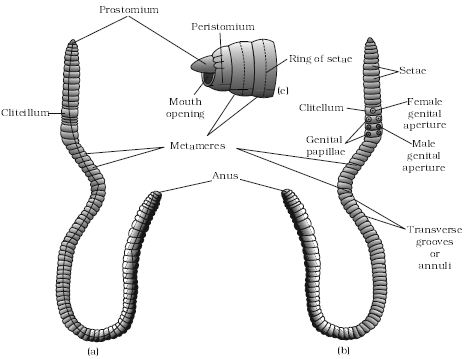 Four pairs of spermathecal apertures are situated on the ventro lateral sides of the intersegmental grooves. A single female genital pore is present in the mid ventral line of 14th segment. A pair of male genital pores is present on the ventro lateral sides of the 18th segment. Numemus minute pores called nephridiopores open on the surface of the body. In each body segment, except the first, last and clitellum, there are rows of S shaped setae, embedded in the epidermal pits in the middle of each segment. Setae can be extended or retracted. Their principal role is in locomotion.