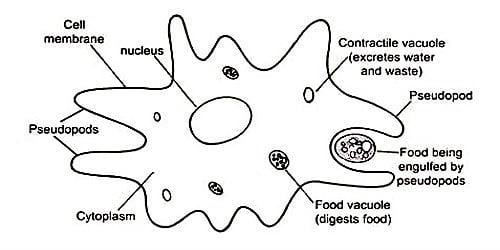 Amoeba is a unicellular organism and reproduces asexually. They reproduce by fission which is a system of asexual reproduction. They are unicellular eukaryotic organisms classified in the Kingdom Protista.

Reproduction is one of the most important characteristics of organisms. The biological process by which an organism, to check its extinction, either singly or with the help of the opposite sex of the same species, produces progeny is called reproduction. Amoeba mainly produces its progeny by the asexual process. The asexual reproduction process is of two types,

(1) Binary Fission: Growth of the body is an important characteristic of organisms. With a suitable environment and proper food, the ‘amount of cytoplasm of the body of Amoeba increases also with the volume of the body. By far the most common form of asexual reproduction employed by amoebae is binary fission. Binary fission is the only mode of reproduction in amoeba as they lack sexual reproduction process. The growth of the body reaches to such an extent that its cytoplasm cannot perform the metabolic activities smoothly. At this stage, Amoeba starts to multiply by binary fission. In this process, one mother Amoeba divides into two daughter Amoebas. Fission is the process in which the parent organism divides into two cells. Mitosis is observed in the nucleus, and the cytoplasm divides at the center of the cell and separates, forming two daughter cells.

The process is described below –

At the beginning of the division, Amoeba withdraws its pseudopodia. The body then takes a circular shape. Its nuclear membrane disappears and the nucleus becomes larger and conspicuous. Gradually the nucleus takes a long shape and the mid-section contracts. At this time the endoplasm around nucleus becomes slightly loose. The chromosomes situated in the nucleus divide longitudinally. The two daughter chromosomes move towards the two opposite poles and the midsection becomes narrow. As a result, the nucleus takes the shape of a dumbell.

The cytoplasm then deposits surrounding the nucleus. About the same time plasmalemma being folded enters towards the interior. Next, the nucleus is divided into two parts and the plasmalemma folds meet together. As a result, the mother Amoeba transforms into two daughters Amoeba. In the meantime, the cytoplasm surrounding the nucleus which is being divided approaches the fold. At this stage, the nucleus is divided into two parts to form two daughter nuclei. Finally, the cytoplasm surrounds each nucleus. Next, the plasmalemma is formed outside the cytoplasm. As a result, the mother Amoeba becomes transformed into two new small Amoebas. Then these new daughter Amoebas begin their own free life. To survive under unfavorable environment Amoeba produces a thick wall around its body. This is called the cyst wall. This stage is known as the cystic stage. 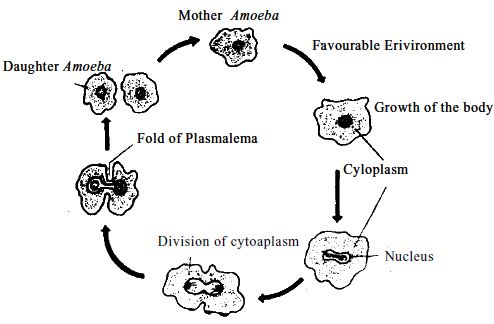 (2) Sporulation: Surrounded by a cyst wall in an unfavorable condition, the nucleus of Amoeba is divided into multiple divisions and forms numerous spores. This process is known as sporulation.

In this process, the first nuclear membrane of Amoeba disappears and the nucleus is divided into several chromatin segments by repeated divisions. They remain in free state inside the endoplasm. These chromatin parts then become encloses by the nuclear membrane. Later on cytoplasm surrounds these small parts and finally, plasmalemma is formed around them. Amoeba reproduces by the structure of spores internally, under unfavorable conditions. It begins with the breakdown of the nuclear membrane and releases chromatin that blocks into the cytoplasm. Next, the spore membrane is formed outside the plasmalemma. In this way in the body of an Amoeba, more than hundred spores may be formed. Breaking the plasmalemma, next to these spores come outside. In a favorable condition, daughter Amoeba comes out from the spores.

However, unlike the amoebae, which undergo encystment when the food supply becomes exhausted, tens of thousands of myxamoebae will fuse, forming a moving stream of cells converging at a fundamental location.