Pulmonary respiration is breathing through the lungs, as human do. Lungs are the main respiratory organs of toad. The toad has a pair of lungs. The lungs are pink coloured hollow sacs. Each lung is formed of innumerable smaller chambers like balloons. Each of this balloon like chambers is called air sac or alveolus. Its wall is enriched with blood vessels.

When the lungs expand the air sacs become, filled with air. Exchange of oxygen and carbon-dioxide taxes place through the air sacs. The fine air tubes with which the air sacs remain connected are called bronchioles. 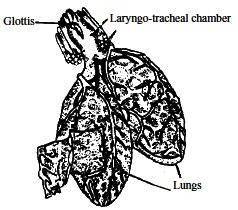 The two tubes which are formed one on each side by joining all the bronchioles of each lung are called bronchus: Right and left bronchi meet together and form a small trachea. Trachea and larynx or voice apparatus together form the laryngo-tracheal chamber. The lungs of each side joining with the larynx and glottis open through the nasal aperture.