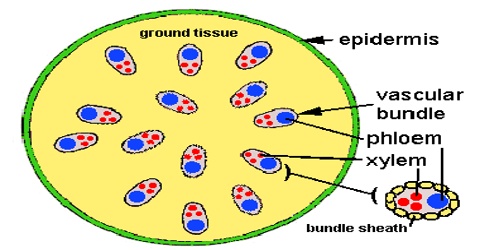 Epidermal tissue system: This is the outer most layer of the plant body. Typically it consists of a single layer of parenchymatous cells. It consists of epidermis, stomata and epidermal outgrowths. This system solely consists of the outermost skin or epidermis of all the plant organs beginning from the underground roots to the fruits and seeds. It is derived from protoderm and consists of epidermis and epidermal outgrowths. In leaves, some specialized cells which surround the stomata are called the guard cells. Epidermal out growth and stomata form this tissue. Chloroplasts are there only in the guard cells of the epidermis. Other epidermal cells generally do not have chloroplasts. The outer wall of epidermis is generally covered by a cuticle. 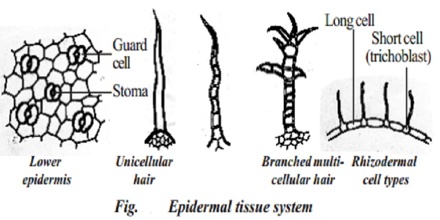 The stomata happen generally in the epidermis of leaves. In some plants such as sugarcane, the guard cells are surrounded by some special cells. Trichomes and root hairs are some epidermal outgrowths. Trichomes might be branched or unbranched. Rhizodermis has two types of epidermal cells – long cells and short cells.

Position: The epidermal tissue system forms the outer-most covering of the whole plant body and comprises epidermal cells, stomata and the epidermal appendages – the trichomes and hairs. The outermost layer of the plant body is made of this tissue. The epidermis of the stem, branch, leaf, root, fruit, etc., is formed from this tissue.

Structure: The epidermal tissue system is made of the following three types of elements:

a) Epidermis: It protects the internal tissues and minimizes the loss of water through evaporation. Epidermis having root hairs is thin-walled and absorbs water.

b) Epidermal stoma: To remove excess water from the aquatic plants as liquid form. It concerned with the Gaseous exchange.

Phloem Formation and Function in Plants