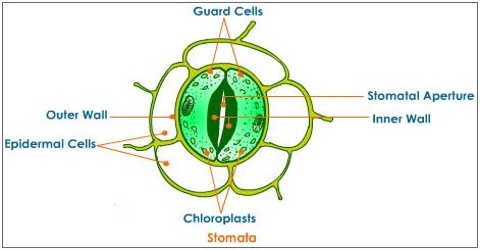 Epidermal stoma: Epidermal Stoma is on the upper and lower surfaces of a leaf. They have two features that avert evaporative water loss: they are packed densely together and they are enclosed by a cuticle, a waxy layer secreted by the cells.

(i) Stomata: In the green part of plant, there is a pore surrounded by two cells crecentric in shape known as stoma.

Position: Tender part of stem, leaf, sepals of the flower and the green part of fruit contain stoma.

(ii) Excessive water is removed from the plant to the atmosphere during transpiration in the form of vapour. 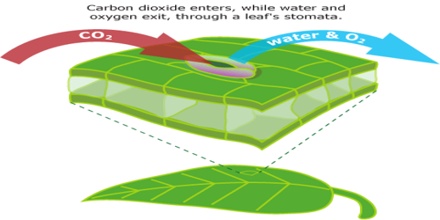 Water stomata: Some pores which are larger than the stomata, found on the outer surface of leaf are known as water stomata. As water stomata are not surrounded by guard cells and unlike stomata they do not contract or relax. Thus water stomata always remain open.

Function: To remove excessive water from the aquatic plants as liquid form.

Formation and Function of Lenticel