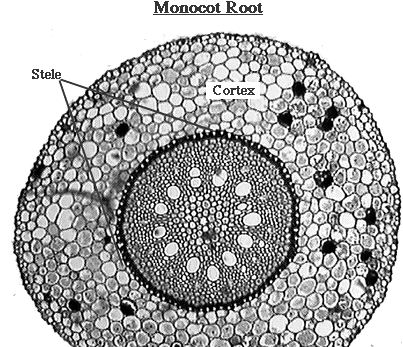 Identifying characteristics of the internal structure of monocot root:

(i) Unicellular root hairs are present in the epiblema in which cuticle is absent. Epiblema is single covered, thin-walled, colorless, polygonal without intercellular spaces, with the existence of unicellular root hairs. It contains more cuticle than dicot roots. Usually, it is single-layered with thin-walled cells. The root hairs and thin-walled epidermal cells take part in the assimilation of water and minerals from the soil. They absorb water and mineral salts from the soil.

(ii) Cortex is not arranged in different layers. It might be diverse with outer dead exodermis. It helps in mechanical support to the roots. It is well developed in monocot roots. It is the ground tissue occupies between the epidermis and the vascular tissue. It consists of many layers of thin-walled parenchyma cells with a lot of intercellular spaces. Chloroplasts are absent in the cortical cells, but they store starch.

(iii) The Pericycle is single-layered. It gives lateral roots only, secondary growth is absent. It is the furthest layer of the stellar system. Several lateral roots arise from this layer. Usually, it composed of a single layer of thin-walled parenchymatous cells. Function: Lateral roots originate from the pericycle.

(iv) The Vascular bundle is radical type. It is radial, arranged in a ring, except mangrove, which also contains lenticels. It consists of alternating strands of xylem and phloem. Xylem is in exarch condition.

All the tissues inside the endodermis comprise the stele. This includes the pericycle, vascular system, and pith.

(v) Endodermis consists of barrel-shaped parenchyma without intercellular spaces. It is the innermost layer of the cortex. It forms a definite ring around the stele. Usually, passage cells are absent in monocot roots. It is prominent and conspicuous in roots.

(vi) Conjunctive tissues are limited or even absent. The cells occupy between the xylem and phloem strands. major functions are, Provide mechanical support and Store starch grains.

(vii) Pith is large or hardly ever condensed. It is a well-developed portion of the monocot root. It consists of thin-walled parenchyma cells with intercellular spaces. It contains an abundant amount of starch grains. Plenty of air chambers are present in the pith of the roots of aquatic plants. Major functions are, Pith cells store starch grains and Resin canals and ducts are present in the cortex.

Define Cell Division with its Types