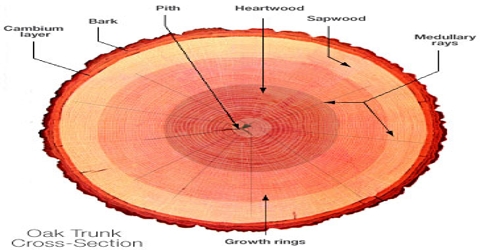 Pith (Medulla):  Pith is moderately huge and prominent, composed of parenchymatous cells and is placed at the center. It is composed of soft, spongy parenchyma cells, which store and transport nutrients throughout the plant. In several stems, the vital part of the pith is damaged during growth, but the pith in nodes will be retained. It is in the focal point of a plant and is gotten from the phloem, however, it does not have the vehicle properties of phloem. It is still not rather clear if the pith in root and stem is the same. The pith cells primarily serve as a storage tissue. It is a tissue in the stems of vascular plants. It is the tissue that is located in a plant’s stem and roots. 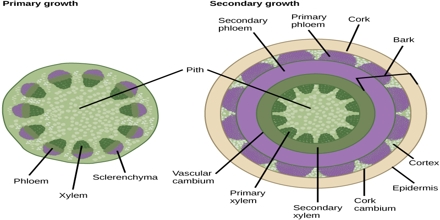 Formation: The pith of young stem contains chloroplast whereas the older stems hold profuse leucoplast. Pith is composed of soft, spongy parenchyma cells, which store and transport nutrients throughout the plant. It is made up of distinctive parenchyma cells. The cells are large but have thin walls. In monocots, it extends also into flowering stems and roots. New pith growth appears white but as it matures it usually turns brown.

Comparison between the Dicot Stem and Monocot Stem

Sexual Reproduction of a Flowering Plant

Hypodermis Formation and Function in Plants