Home Biology Comparison between the Dicot Root and Monocot Root 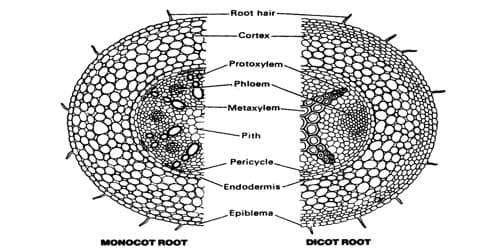 Dicot root has a tap root-like arrangement and is present in dicot plants. It has a constant amount of xylem and phloem such that, xylem is in ‘X’ form and is bounded by phloem. Dicot root shows secondary growth. Pea, beans, and peanuts, etc. are examples of dicot roots.

Monocot root has fibrous root-like formation and is present in monocot plants. It has xylem and phloem in sporadic manners set in a ring-like formation. There is no secondary growth in monocot roots. Maize, banana, and palm, etc. are its examples.

Dicot Root – The root of the plant that has two cotyledons in its seed is known as dicot root. 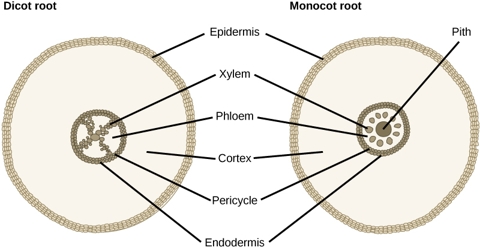 Monocot Root – The root of the plant that has single cotyledon in its seed is known as monocot root.

Comparison between the Stem Structure and Root Structure

Function of the Endodermis in Plants