Home Geology Precipitation in the Atmosphere 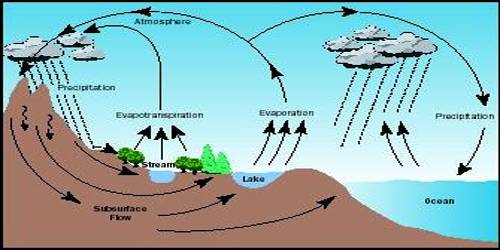 The process of continuous condensation in the free air helps the condensed particles to grow in size. When the resistance of the air fails to hold them against the force of gravity, they fall on to the earth’s surface. So after the condensation of water vapor, the release of moisture is known as precipitation. Vapour also affects the weather because, as indicated above, it condenses into clouds and falls as rain or other forms of precipitation. This may take place in liquid or solid form. The precipitation in the form of water is called rainfall, when the temperature is lower than the 0°C, precipitation takes place in the form of fine flakes of snow and is called snowfall. Moisture is released in the form of hexagonal crystals. These crystals form flakes of snow. Besides rain and snow, other forms of precipitation are sleet and hail, though the latter is limited in occurrence and are sporadic in both time and space. 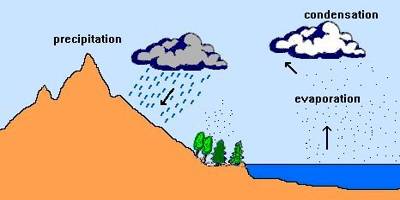 Sleet is frozen raindrops and refrozen melted snow-water. When a layer of air with the temperature above freezing point overlies a subfreezing layer near the ground, precipitation takes place in the form of sleet. Raindrops, which leave the warmer air, encounter the colder air below. As a result, they solidify and reach the ground as small pellets4 of ice not bigger than the raindrops from which they are formed.

Sometimes, drops of rain after being released by the clouds become solidified into small rounded solid pieces of ice and which reach the surface of the earth are called hailstones. These are formed by the rainwater passing through the colder layers. Hailstones have several concentric layers of ice one over the other.