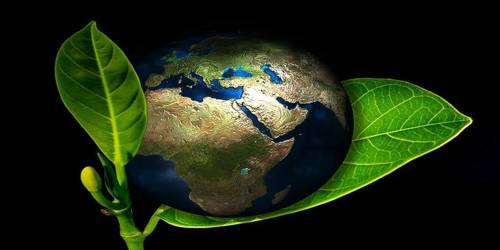 The structure of an ecosystem involves a description of the available plant and animal species. From a structural point of view, all ecosystems consist of abiotic and biotic factors. Abiotic factors include rainfall, temperature, sunlight, atmospheric humidity, soil conditions, inorganic substances (carbon dioxide, water, nitrogen, calcium, phosphorus, potassium. etc.). Biotic factors include the producers, (primary, secondary, tertiary) the consumers and the decomposers. The producers include all the green plants, which manufacture their own food through photosynthesis. The primary consumers include herbivorous animals like deer, goats, mice, and all plant-eating animals. The carnivores include all the flesh-eating animals like snakes, tigers, and lions. Certain carnivores that feed also on carnivores are known as top carnivores like hawks and mongooses. Decomposers are those that feed on dead organisms (for example, scavengers like vultures and crows), and further breaking down of the dead matter by other decomposing agents like bacteria and various micro-organisms. 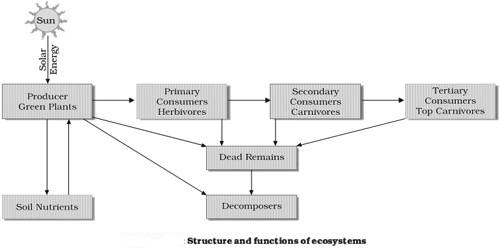 For example, a plant-eating beetle feeding on a paddy stalk is eaten by a frog, which is, in turn, eaten by a snake, which is then consumed by a hawk. This sequence of eating and being eaten and the resultant transfer of energy from one level to another are known as the food-chain. Transfer of energy that occurs during the process of a food chain from one level to another is known as a flow of energy. However, food-chains are not isolated from one another. For example, a mouse feeding on grain may be eaten by different secondary consumers (carnivores) and these carnivores may be eaten by other different tertiary consumers (top carnivores). In such situations, each of the carnivores may consume more than one type of prey. As a result, the food- chains get interlocked with one another.