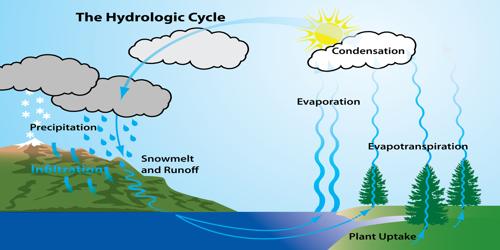 Water is a cyclic resource. It can be used and re-used. Water also undergoes a cycle from the ocean to land and land to the ocean. The hydrological cycle describes the movement of water on, in, and above the earth. The water cycle has been working for billions of years and all the life on earth depends on it. Next to air, water is the most important element required for the existence of life on earth. The distribution of water on earth is quite uneven. Many locations have plenty of water while others have very limited quantity. The hydrological cycle is the circulation of water within the earth’s hydrosphere in different forms i.e. the liquid, solid and the gaseous phases. It also refers to the continuous exchange of water between the oceans, atmosphere, land surface and subsurface and the organisms. 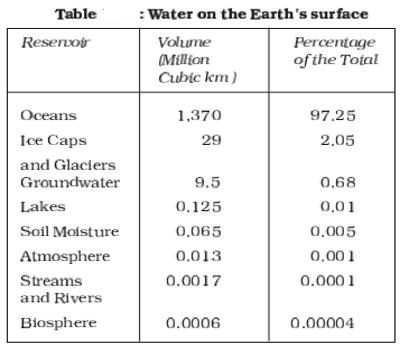 Table 1 shows the distribution of water on the surface of the earth. About 71 percent of the planetary water is found in the oceans. The remaining is held as freshwater in glaciers and icecaps, groundwater sources, lakes, soil moisture, atmosphere, streams and within life. Nearly 59 percent of the water that falls on land returns to the atmosphere through evaporation from over the oceans as well as from other places. The remainder runs-off on the surface infiltrates into the ground or a part of it becomes glacier (Figure). 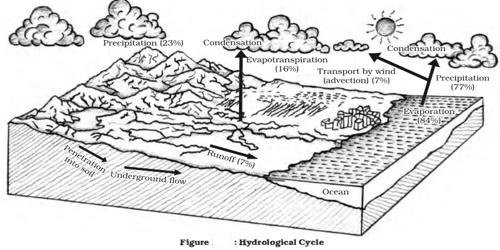 It is to be noted that the renewable water on the earth is constant while the demand is increasing tremendously. This leads to the water crisis in different parts of the world — spatially and temporally. The pollution of river waters has further aggravated the crisis.