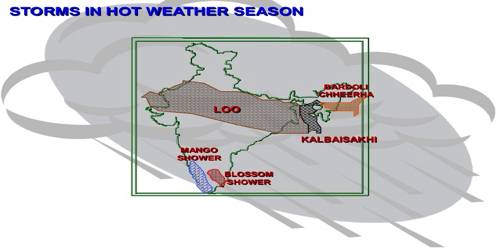 The months of March, April and May are the summer months in India. The summer months are a period of excessive heat and falling air pressure in the northern half of the country. The hot weather season in south India is mild and not as intense as found in north India.

(i) Mango Shower: Towards the end of summer, there are pre-monsoon showers which are common phenomena in Kerala and coastal areas of Karnataka. This monsoon shower is a type of local wind prevalent mostly in the South Indian States. Locally, they are known as mango showers since they help in the early ripening of mangoes. They are notable across much of South and Southeast Asia, including India, and Cambodia.

(ii) Blossom Shower: With this shower, coffee flowers blossom in Kerala and nearby areas. The months of February to April are when the first showers of the year are received. For the coffee farmer, these first showers are indeed referred to as blossom showers. (iii) Nor Westers: It is a strong northwest wind. These are dreaded evening thunderstorms in Bengal and Assam. Their notorious nature can be understood from the local nomenclature of ‘Kalbaisakhi’, a calamity of the month of Baisakh. These showers are used for tea, jute and rice cultivation. It occurs, with increasing frequency, from March till monsoon establishes over North-East India. In Assam, these storms are known as ‘Bardoli Chheerha’.

(iv) Loo: This creates a vast low-pressure area over North Indian plains during the afternoon. Hot, dry and oppressing winds blowing in the Northern Plains from Punjab to Bihar with higher intensity between Delhi and Patna. It is especially strong in the months of May and June.