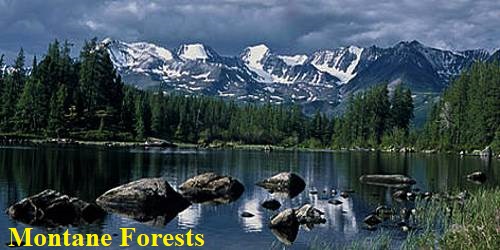 The Himalayas are the main place where these mountain forests can be found in India. The Himalayan ranges show a succession of vegetation from the tropical to the tundra, which changes in with the altitude. Deciduous forests are found in the foothills of the Himalayas. It is succeeded by the wet temperate type of forests between an altitude of 1,000-2,000 m. In the higher hill ranges of northeastern India, hilly areas of West Bengal and Uttaranchal, evergreen broadleaf trees such as oak and chestnut are predominant. Between 1,500-1,750 m. pine forests are also well-developed in this zone, with Chir Pinc as a very useful commercial tree. Deodar, a highly valued endemic species grows mainly in the western part of the Himalayan range. Deodar is a durable wood mainly used in construction activity. Similarly, the chinar and the walnut, which sustain the famous Kashmir handicrafts, belong to this zone. Blue pine and spruce appear at altitudes of 2,225-3.048 m. 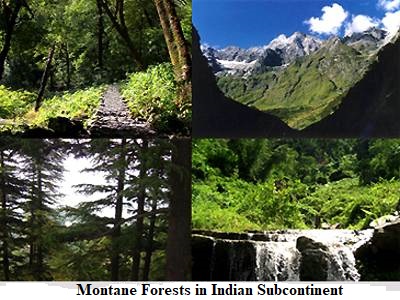 At many places in this zone, temperate grasslands are also found. But in the higher reaches, there is a transition to Alpine forests and pastures. Silver firs, junipers, pines, birch, and rhododendrons etc. occur between 3.000-4.000 m. However, these pastures are used extensively for transhumance by tribes like the Gujjars, the Bakarwals, the Bhotiyas and the Caddis. The southern slopes of the Himalayas carry a thicker vegetation cover because of relatively higher precipitation than the drier north-facing slopes. At higher altitudes, mosses and lichens form part of the tundra vegetation.

The southern mountain forests include the forests found in three distinct areas of Peninsular India viz; the Western Ghats, the Vindhyas, and the Nilgiris. As they are closer to the tropics, and only 1,500 m above the sea level, vegetation is temperate in the higher regions and subtropical on the lower regions of the Western Chats, especially in Kerala, Tamil Nadu, and Karnataka. The temperate forests are called Sholas in the Nilgiris, Anaimalai and Palani hills. Some of the other trees of this forest of economic significance include magnolia, laurel, cinchona, and wattle. Such forests are also found in the Satpura and the Maikal ranges.