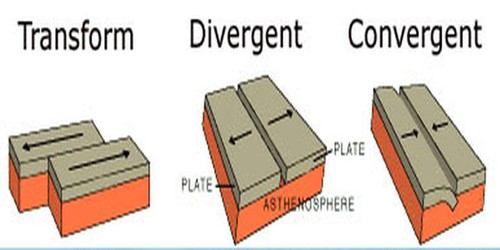 A tectonic or plate boundary where two plates are moving away from each other and new crust is forming from magma that rises to the Earth’s surface between the two plates.

There are three types of plate boundaries:

Convergent Boundaries: Where the crust is destroyed as one plate dived under another. The location where sinking of a plate occurs is called a seduction zone. There are three ways in which convergence can occur. These are: (i) between an oceanic and continental plate; 09 between two oceanic plates; and (iii) between two continental plates. 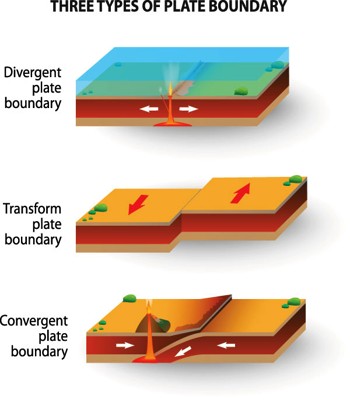 Where the crust is neither produced nor destroyed as the plates slide horizontally past each other. Transform faults are the planes of separation generally perpendicular to the mid-oceanic ridges. As the eruptions do not take all along the entire crest at the same time, there is a differential movement of a portion of the plate away from the axis of the earth. Also, the rotation of the earth has its effect on the separated blocks of the plate portions.