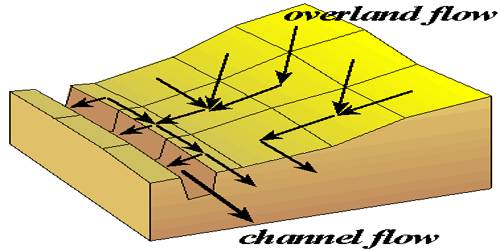 In humid regions, which receive heavy rainfall running water is considered the most important of the geomorphic agents in bringing about the degradation of the land surface. Running water is the most powerful agent of erosion.

Overland flow causes sheet erosion. Depending upon irregularities of the land surface, the overland flow may concentrate into narrow to wide paths. Because of the sheer friction of the column of flowing water, minor or major quantities of materials from the surface of the land are removed in the direction of flow and gradually small and narrow rills will form. These rills will gradually develop into long and wide gullies: the gullies will further deepen, widen, lengthen, and unite to give rise to a network of valleys.

In the early stages, down-cutting dominates in which irregularities such as waterfalls and cascades will be removed. In the middle stages, streams cut their beds slower, and lateral erosion of valley sides becomes severe. Gradually, the valley sides are reduced to lower and lower slopes. The divides between drainage basins are likewise lowered until they are almost completely flattened leaving finally, lowland of faint relief with some low resistant remnants called monadnocks standing out here and there. This type of plain forming as a result of stream erosion is called a peneplain (an almost plain).