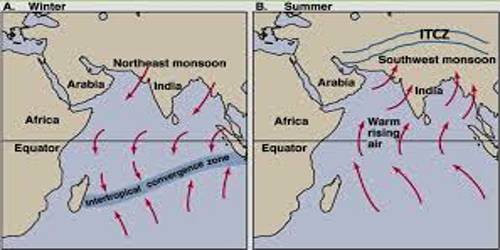 In India, there is a huge dissimilarity in temperature and precipitation, not only from place to place but also from season to season. The period of the monsoon varies from 100 to 120 days from early June to mid- September. The monsoon arrives at the southern tip of the Indian Peninsula usually by the first week of June.

(i) Rainfall received from the southwest monsoons is seasonal in character, which occurs between June and September.

(ii) Monsoonal rainfall is largely governed by relief or topography. For instance, the windward side of the Western Ghats registers a rainfall of over 250 cm. Again, the heavy rainfall in the northeastern states can be attributed to their hill ranges and the Eastern Himalayas.

(iii) The monsoon rainfall has a declining trend with increasing distance from the sea. Kolkata receives 119 cm during the southwest monsoon period, Patna 105 cm, Allahabad 76 cm, and Delhi 56 cm.

(iv) The monsoon rains occur in wet spells of few days duration at a time. The wet spells are interspersed with rainless interval known as ‘breaks’. These breaks in rainfall are related to the cyclonic depressions mainly formed at the head of the Bay of Bengal, and their crossing into the mainland. Besides the frequency and intensity of these depressions, the passage followed by them determines the spatial distribution of rainfall.

(v) The summer rainfall comes in a heavy downpour leading to considerable runoff and soil erosion.

(vi) Monsoons play a pivotal role in the agrarian economy of India because over three-fourths of the total rain in the country is received during the south-west monsoon season.

(vii) Its spatial distribution is also uneven which ranges from 12 cm to more than 250 cm.

(viii) The beginning of the rains sometimes is considerably delayed over the whole or a part of the country.

Comparison between the Himalayan and the Peninsular River