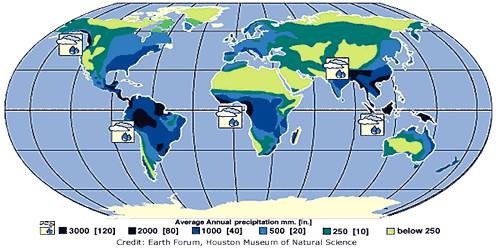 Different places on the earth’s surface receive different amounts of rainfall in a year and that too in different seasons.

In general, as we proceed from the equator towards the poles, rainfall goes on decreasing steadily. The coastal areas of the world receive greater amounts of rainfall than the interior of the continents. The rainfall is more over the oceans than on the landmasses of the world because of being great sources of water. Between the latitudes 35° and 40° N and S of the equator, the rain is heavier on the eastern coasts and goes on decreasing towards the west. But, between 45° and 65° N and S of the equator, due to the westerlies, the rainfall is first received on the western margins of the continents and it goes on decreasing towards the east. Wherever mountains run parallel to the coast, the rain is greater on the coastal plain, on the windward side and it decreases towards the leeward side.

On the basis of the total amount of annual precipitation, major precipitation regimes of the world are identified as follows.

The equatorial belt, the windward slopes of the mountains along the western coasts in the cool temperate zone and the coastal areas of the monsoon land receive heavy rainfall of over 200 cm per annum. Interior continental areas receive moderate rainfall varying from 100 – 200 cm per annum. The coastal areas of the continents receive the moderate amount of rainfall. The central parts of the tropical land and the eastern and interior parts of the temperate lands receive rainfall varying between 50 -100 cm per annum. Areas lying in the rain shadow zone of the interior of the continents and high latitudes receive very low rainfall-less than 50 cm per annum. Seasonal distribution of rainfall provides an important aspect to judge its effectiveness. In some regions, rainfall is distributed evenly throughout the year such as in the equatorial belt and in the western parts of cool temperate regions.