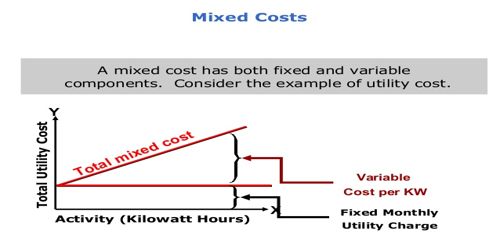 Mixed costs contain elements of both fixed and variable cost behavior. There are numerous methods are used for segregating mixed costs into fixed and variable. Here describe four main techniques that are found in practice and they may be listed as follows:

Level of Activity Method: In this method, we compare two level of production with the number of expenses in these levels. Variable cost will be calculated with the following method:

Least Square Method: This is a statistical method to which we use this method for calculating a line of best fit. This method is based on the linear equation y = mx + c, y is the total cost, x is the volume of output and c is total fixed cost. By solving this equation mathematically, we can calculate the variable cost (M) at a different level of production.

Concept of Zero Based Budgeting