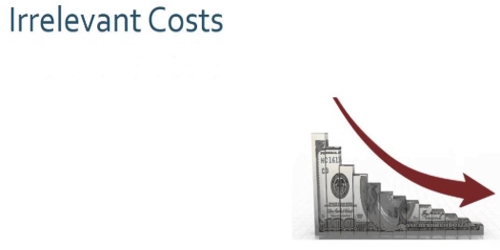 Irrelevant Cost: An avoidable cost is a cost that can be eliminated in whole or in part by choosing one alternative over another. These costs are those that will not change in the future when you make one decision versus another. They are costs that will continue to happen. It is a managerial accounting term that represents a cost, either positive or negative, that would not be affected by a management decision. By choosing the alternative of going to a movie, the cost of renting the videotape can be avoided. By choosing the alternative of renting the videotape, the cost of the movie ticket can be avoided. Therefore, the cost of the movie ticket and the cost of renting the videotape are both avoidable costs. On the other hand, the rent on the apartment is not an avoidable cost of either alternative. You should continue to rent your apartment under either alternative. Avoidable costs are relevant costs. Unavoidable costs are irrelevant cost. For example, the salary of an investor relations officer may be an irrelevant cost if a management decision relates to issuing a new product, since dealing with investors has nothing to do with that particular decision. These costs are costs which are independent of the different decisions or alternatives. They are not measured by making a decision.

Two broad categories of costs are never relevant in a decision. These irrelevant costs are:

Concept of Zero Based Budgeting