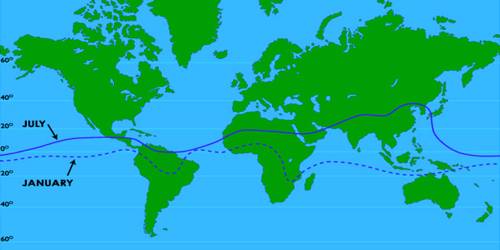 Zone of low atmospheric pressure and ascending air located at or near the equator. Rising air currents are due to global wind convergence and convection from thermal heating. The location of the ITCZ varies with the seasons, and lags behind the sun’s relative location above the Earth’s surface by about 1 to 2 months, and correlates usually to the thermal equator. 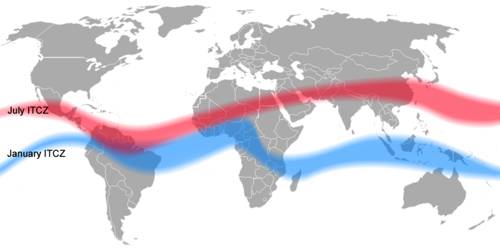 ITCZ is a belt of low pressure which circles the Earth usually near the equator where the trade winds of the Northern and Southern Hemispheres come jointly. The ITCZ is a zone of convergence at the thermal equator where the trade winds gather. It is a low-pressure belt and migrates to the altering location of the thermal equator. The thermal equator receives the most strong heat from the Sun. Around 20th June each year, the Sun is overhead at 23½º North, the Tropic of Cancer. Around 20th December the Sun is overhead at 23½º South, the Tropic of Capricorn. It is characterized by a convective movement which generates frequently strong thunderstorms over huge areas. It is most vigorous over continental ground masses by day and comparatively less active over the oceans.