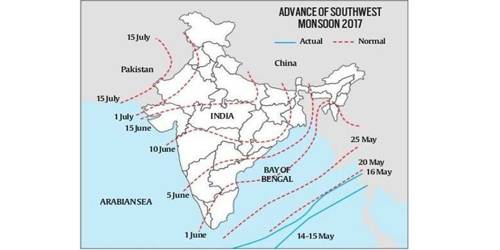 The onset of the Indian Monsoon

Towards the end of the nineteenth century, it was believed that the differential heating of land and sea during the summer months is the mechanism which sets the stage for the monsoon winds to drift towards the subcontinent. During April and May when the sun shines vertically over the Tropic of Cancer, the large landmass in the north of Indian Ocean gets intensely heated. Southwest monsoon winds originating from the Indian Ocean gets divided upon reaching the southern Indian shore. One section of the moisture-laden wind travels through the Bay of Bengal, whereas, the other arm of the monsoon-bringing winds moves ahead through the Arabian Sea. This causes the formation of an intense low pressure in the northwestern part of the subcontinent.

Since the pressure in the Indian Ocean in the south of the landmass is high as water gets heated slowly, the low-pressure cell attracts the southeast trades across the Equator. These conditions help in the northward shift in the position of the ITCZ. The southwest monsoon may thus, be seen as a continuation of the southeast trades deflected towards the Indian subcontinent after crossing the Equator. These winds cross the Equator between 40°E and 60°E longitudes. Entry of Monsoon into India: The southwest monsoon sets in over the Kerala coast by 1st June and moves swiftly to reach Mumbai and Kolkata between 10th and 13th June. By mid-July, southwest monsoon engulfs the entire subcontinent.