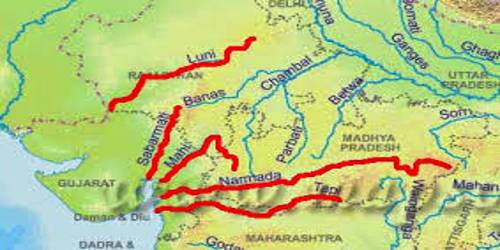 The Peninsular drainage system is older than the Himalayan one. This is evident from the broad, largely-graded shallow valleys, and the maturity of the rivers. The Western Ghats running close to the western coast act as the water divide between the major Peninsular rivers, discharging their water in the Bay of Bengal and as small rivulets joining the Arabian Sea. Most of the major Peninsular rivers except Narmada and Tapi flow from west to east. The Chambal, the Sind, the Betwa, the Ken, the Son, originating in the northern part of the Peninsula belong to the Ganga river system. These rivers have small basins and catchment areas. The Godavari has the largest basin area of 3.12 lakh square kilometers only which is less than one-third the basin area of the Indus. Some of the Peninsular rivers, such as the Narmada and the Tapi form estuaries. Other rivers such as the Mahanadi, the Godavari, the Krishna and the Cauvery form deltas. The other major river systems of the peninsular drainage are – the Mahanadi the Godavari, the Krishna and the Kaveri. Peninsular rivers are characterized by fixed course, an absence of meanders and non-perennial flow of water. The Narmada and the Tapi which flow through the rift valley are, however, exceptions.

Peninsula Rivers are much older than the Himalayan Rivers. They are non-perennial rivers with an utmost release in the rainy season. The main water divide in peninsular rivers is formed by the Western Ghats, which run from north to south close to the western coast.