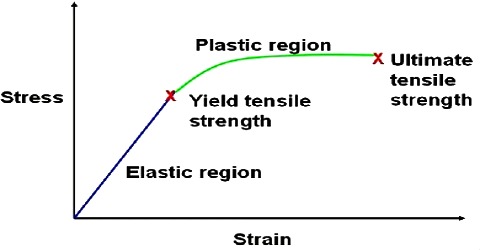 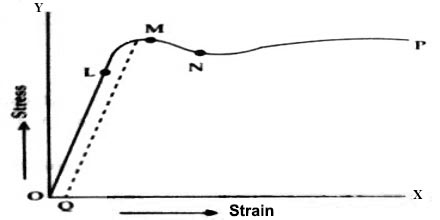 In fig, O is the origin where stress is zero, so strain is also zero. From O to point L, the graph is a straight line. Here stress and strain are proportional to each other i.e., as the stress increases, strain also increases proportionately. Upto OL the wire will be fully elastic i.e., if stress is withdrawn strain decreases to zero. So the force associated with this stress is the elastic limit. Beyond OL the wire will not remain perfectly elastic. Now, if stress is increased further the strain will increase more rapidly. In this situation, rate of increase of stress will be more than that of strain i.e., if stress is withdrawn the wane wall not return to its original condition. There will be permanent strain in the wire. In figure OQ represents permanent deformation. This state will continue upto point M. The poind is called yield point. Afterward, strain continues to increase upto N even though stress is not increased. If the stress is increased further, the wire will be thinner in many places and finally the wire will snap. The point at which snap occurs is called its breaking point. In the graph, P is the breaking point. The stress at point P is called breaking stress.

Definition of breaking stress can be written as, “The minimum force per unit area of a body for which the body breaks or snaps is called breaking stress.”

By multiplying breaking stress with area of cross-section of the wire breaking weight or breaking force at obtained. It is to be mentioned that it the stress is applied for a long time on an object; it may develop permanent strain even though the stress is below the elastic limit.