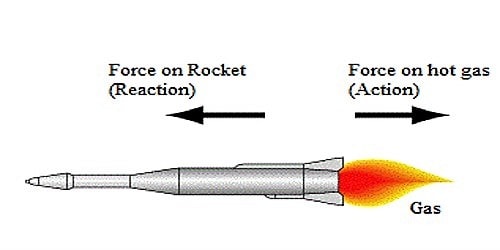 The propulsion of a rocket is one of the most interesting examples of Newton’s third law of motion and the law of conservation of momentum. The rocket is a system whose mass varies with lime. In a rocket. the gases at high temperature and pressure. produced by the combustion of the fuel, are ejected from a nozzle. The reaction of the escaping gases provides the necessary thrust for the launching and flight of the rocket. 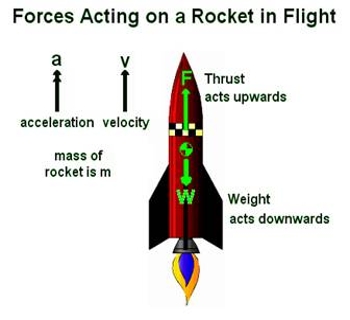 Newton’s third law explains the generation of thrust by a rocket engine. In a rocket engine, the hot exhaust gas is produced through the combustion of a fuel with an oxidizer. The hot exhaust gas flows through the rocket nozzle and is accelerated to the rear of the rocket. In reaction, a thrusting force is produced on the engine mount. The thrust accelerates the rocket as described by Newton’s second law of motion.

A very important practical application of Newton’s third law of motion is the transportation of jet planes and rockets.

Rockets work on the principle of conservation of momentum. If you accelerate a small amount of gas in one direction, it pushes back with an equal and opposite force, accelerating your much larger spaceship at a proportionately lesser rate. The rockets gain momentum equivalent to the momentum of the gas expelled from the engine but in opposite course they continue to eject gases after the rocket has begun moving and hence rockets continue to gain more and more momentum so in its place of traveling at steady momentum they get faster and faster as long as engines are operating. The movement of both planes and rockets is made probable by a large mass of hot gases gushing out from the nozzle following them.

The acceleration of the rocket is given as:

a = mv/M as the mass decreases the rocket accelerates.

As the gases pump out with enormous momentum, considering the enormous velocity and mass per second of the gases, there is also an equivalent momentum in the contradictory course, which thrust the jet plane or rocket forward at enormous speed.

What are the fundamental forces?

What do you mean by friction?