The northern plains are formed by the alluvial deposits brought by the rivers – the Indus, the Ganga and the Brahmaputra. These plains extend approximately 3,200 km from the cast to the west. The average width of these plains varies between 150-300 km. The maximum depth of alluvium deposits varies between 1,000-2.000 m. From the north to the south, these can be divided into three major zones: the Bhabar, the Tarai, and the alluvial plains. The alluvial plains can be further divided into the Khadar and the Bhangra.

Bhabar is a narrow belt ranging from 8-10 km parallel to the Shiwalik foothills at the break-up of the slope. As a result of this, the streams and rivers coming from the mountains deposit heavy materials of rocks and boulders, and at times, disappear in this zone. South of the Bhabar is the Tarai belt with an approximate width of 10-20 km where most of the streams and rivers re-emerge without having any properly demarcated channel, thereby, creating marshy and swampy conditions known as the Tarai. This has a luxurious growth of natural vegetation and houses a varied wildlife. 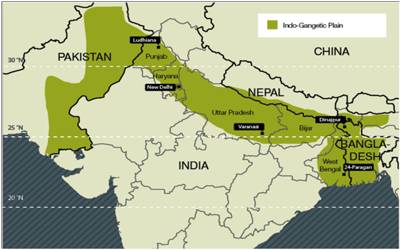 The south of Tarei is a belt consisting of old and new alluvial deposits known as the Bhangra and Khadar respectively. These plains have characteristic features of the mature stage of fluvial erosion and depositional landforms such as sand bars, meanders, oxbow lakes, and braided channels. The Brahmaputra plains are known for their riverine islands and sandbars. Most of these areas are subjected to periodic floods and shifting river courses forming braided streams.

The mouths of these mighty rivers also form some of the largest deltas of the world, for example, the famous Sunderbans delta. Otherwise, this is a featureless plain with a general elevation of 50-150 m above the mean sea level. The states of Haryana and Delhi form a water divide between the Indus and the Ganga river systems. As opposed to this, the Brahmaputra river flows from the northeast to the southwest direction before it takes an almost 90° southward turn at Dhubri before it enters into Bangladesh. These river valley plains have a fertile alluvial soil cover which supports a variety of crops like wheat, rice, sugarcane, and jute, and hence, supports a large population.