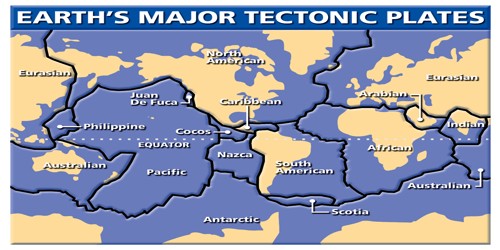 Plate tectonics is the theory that Earth’s external shell is separated into numerous plates that glide over the mantle, the rocky internal layer above the core. Since the advent of the concept of seafloor spreading, the interest in the problem of distribution of oceans and continents was revived.

It was in 1967, McKenzie and Parker and also Morgan, independently collected the obtainable ideas and came out with another perception termed Plate Tectonics. A tectonic plate is a massive, irregularly-shaped slab of solid rock, usually composed of both continental and oceanic lithosphere. Plates move horizontally over the asthenosphere as rigid units. The lithosphere includes the crust and top mantle with its thickness range varying between 5-100 km in oceanic parts and about 200 km in the continental areas. A plate may be referred to as the continental plate or oceanic plate depending on which of the two occupy a larger portion of the plate. 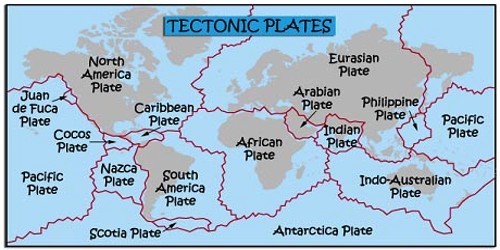 Pacific plate is largely an oceanic plate whereas the Eurasian plate may be called a continental plate. The theory of plate tectonics proposes that the earth’s lithosphere is divided into seven major and some minor plates. Young Fold Mountain ridges, trenches, and/or faults surround these major plates. The major plates are as follows:

(i) Antarctica and the surrounding oceanic plate

Some important minor plates are listed below:

(i) Cocos plate: Between Central America and Pacific plate

(iv) Philippine plate: Between the Asiatic and Pacific plate.