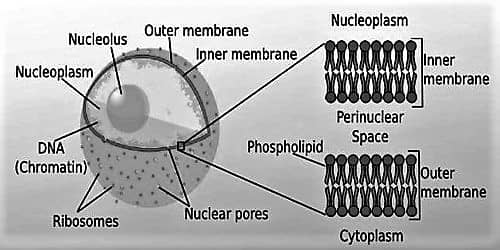 Nucleoplasm: The nucleoplasm is a type of protoplasm that is made up mostly of water, a mixture of various molecules, and dissolved ions. It is a transparent and dense fluid bounded by a nuclear membrane. Nucleolus and chromosomes are present in it. It is important, because many substances, including enzymes and nucleotides, are dissolved in the nucleoplasm. Nucleoplasm is the protoplasm of the nucleus of a cell. It is the gelatinous essence within the nuclear envelope.

This substance is completely enclosed in the nuclear envelope, which also contains nucleotides and significant enzymes that facilitate replication. It is an extremely gelatinous, steamy liquid that supports the chromosomes and nucleoli. A soluble, fluid component of the nucleoplasm is called the nuclear hyaloplasm. 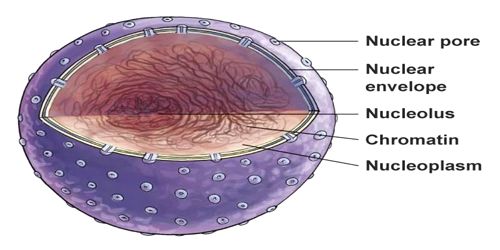 Function: The main function of the nucleoplasm is to serve as a suspension substance for the organelles inside the nucleus. It also helps maintain the shape and structure of the nucleus and plays an important role in the transportation of materials that are vital to cell metabolism and function. It holds chromosomes and performs various organic functions. It also supports the nucleus by helping to maintain its shape.