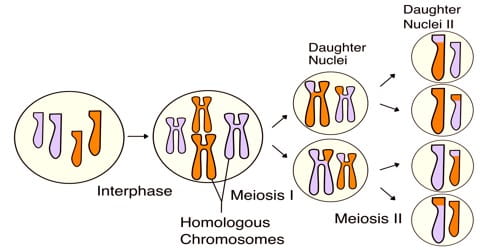 Meiosis is cell division for gamete cells. It is used for just one reason in the human body: the production of gametes – sex cells, or sperm and eggs. Its objective is to make daughter cells accurately half as many chromosomes as the starting cell. It is only organisms that perform sexual reproduction.

So, Meiosis is a procedure where a single cell divides twice to create four cells containing half the unique amount of genetic in sequence. These cells are our sex cells – sperm in males, eggs in females. (c) Since Prophase-1 is a lengthy process it can be divided into five sub-phases. Pairing up and crossing over between homologous chromosomes pairs occur at prophase.

(e) The genetic exchange occurs because of the formation of chiasma and crossing over. The gametes can then meet, during reproduction, and fuse to create a new zygote.

(h) Meiosis produces sex cells or gametes (eggs in females and sperm in males). It is the procedure in eukaryotic, sexually-reproducing animals that reduces the number of chromosomes in a cell before reproduction. Many organisms package these cells into gametes, such as egg and sperm.

The daughter cells are formed in this process due to crossing over and a different arrangement of the chromosome is not identical in Properties. Daughter cells are genetically different from each other and from the parent cell. This is very significant in the formation of varieties.

Formation of Tissues and Organs