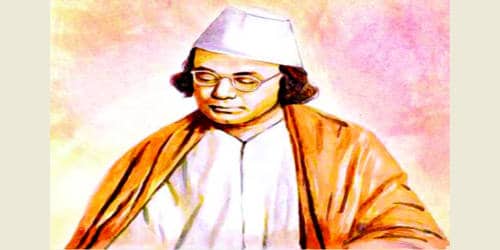 Kazi Nazrul Islam is the national poet of Bangladesh. He is one of the most outstanding poets of the indo-Pakistan-sub continent. He is well known as the Rebel poet in Bengali literature. He was born at Churulia, in Asansol. His father’s name was Kazi Fakir Ahmad and his mother s name was Zaheda Khatun.  Kazi Nazrul Islam popularly known as the “rebel poet” is my favorite poet. I admire all the great poets but I love Nazrul Islam most.

He lost his father early in his life and had to struggle hard against poverty. His parents lost four children before his birth. So, they gave him the nickname Dhuku Mia. He had to earn his livelihood since he was a little boy. In his early life, Nazrul lost his mother. For this lie had struggled hard against poverty. In his boyhood, he was very precocious and naughty. Nazrul got his boyhood education in his village Maktab. He was admitted to a local Primary School. But he did not obey the hard and fast rule of the school. He could not confine himself to the routine-bound day-to-day work in the class. He troubled the villagers with his boyish wicked deeds. The villagers called him “Khepa”. After passing the Primary Examination he devoted himself to religion. He became a teacher in the village Maktab. There he taught the village children the holy Quran. He also became a muazzin. At this time he became well acquainted with Islamic lore which influenced his later literary works to a great extent. He also entertained the village people through theatrical party known as Letto and earned name and fame.

At twelve he fled away from home and took the job of a baker boy and for that, he got taka 5 per month. At this time he drew the attention of a Muslim sub-inspector of police. He took Nazrul to his own village home and got him admitted into a high school. The First World War broke out. He joined the War and became a Havildar.

He continued his writings there. He showed a deep passion for literary works from his early life. He wrote several poems and prose pieces which made him famous. He composed Bengali verses full of Arabic and Persian words. He sent several poems and prose compositions even from the military camps. The Regiment was banned. He returned to Calcutta. At this time he edited a magazine named Dhumketu in which he published all his revolutionary writings. He was sent to jail for one year for writing the poem “Agamani”. His famous creations are Agni Bina, Bandhan Hara, Rikter Bedan, Bisher Bansi, pralay-Shika, etc. No oppression or pangs could ever dominate his indomitable spirit. He went on composing verses and prose pieces one after another even when he was confined in the jail.

Kazi Nazrul Islam, my favorite poet, is no more in our midst. I love and admire Nazrul Islam for his writings of academic revolutionary spirits. Nazrul’s writings were full of hope, energy, aspiration, and result. His writings awakened the sleeping people of this subcontinent. It was Nazrul through whom the people began to hope for a better future. He made them conscious of their rights. He helped them to fight for independence and break the bondage of slavery and fetters of subjugation.

Nazrul was at the same time a poet, a musician, a novelist, a story writer, and a dramatist. Poet Nazrul Islam is greatly honored as the national poet of Bangladesh in 1972. Nazrul is no longer in us but his poems and other writings inspire us for all times. He died on the 29th of August, 1976 in Dhaka. But his literary works will never die. He has established himself in our hearts and in the annals of Bengali literature.