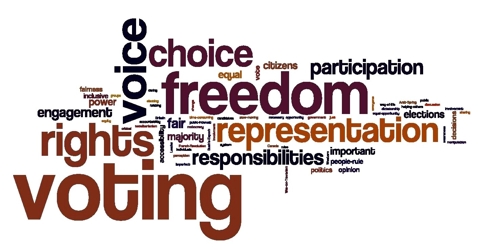 Democracy is a system of government by all the people of a country, usually through the representatives whom they elect, as allowing freedom of speech, religious and political opinion. It means fair and equal treatment of each other by citizens without social class divisions. In fact it’s the system of governing the country according to people’s will. In a democratic country people elect their representatives who work for the people. Free and fair election is the pre-condition of democracy. As a matter of fact democracy is the right of the people to speak equal rights. They enjoy the rights of food, cloth, shelter, education, medical treatment and other facilities. People are the source of power, that is, possesses the absolute power, in a democratic country.

In a true sense of democracy the majority party should form a coalition with the main opposition party and work together in democracy. Moreover, good relations with the neighboring country, liberty of newspaper, free judicial system are the essential conditions for democracy. But in some cases the ruling party in coalition with minor parties forms the government which causes anarchy. On the other hand, the main opposition party in coalition with some minor parties is engaged in destructive criticism and coalition.

Modern society, with its size and complexity, offers few opportunities for direct democracy. Even in the northeastern United States, where the New England town meeting is a hallowed tradition, most communities have grown too large for all the residents to gather in a single location and vote directly on issues that affect their lives.