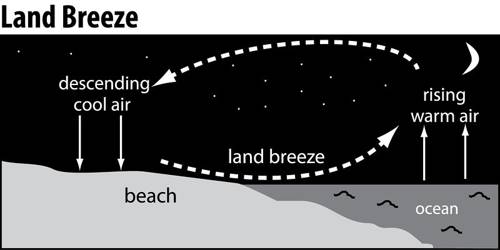 Land Breeze: Local thermal circulation pattern found at the interface between land and water. In this circulation system, surface winds blow from land to water during the night. It is created when the earth is cooler than the water such as at night and the surface winds have to be very light. When this occurs the air over the water gradually begins to get higher, as the air begins to rise the air over the surface of the ocean has to be replaced, this is done by drawing the air from the land over the water, thus creating a sea breeze. 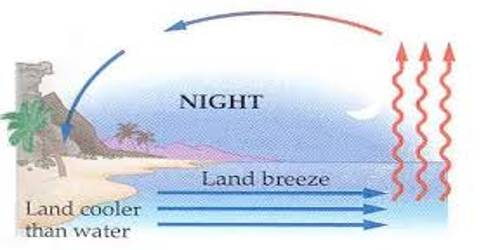 Land breezes generally happen at night. At night, the warmth of the land cools rapidly without the insolation from the sun. Heat is quickly re-radiated back to the contiguous air. The water along the shore will then be warmer than the coastal land, creating a net movement of air from the land surfaces towards the ocean. It is a local wind system characterized by a flow from land to water late at night. Land breezes vary with sea breezes along coastlines contiguous to large bodies of water. Both are induced by differences that happen between the heating or cooling of the water surface and the contiguous land surface. The land breeze is naturally shallower than the sea breeze since the cooling of the atmosphere over ground is confined to a shallower layer at night than the heating of the air throughout the day.