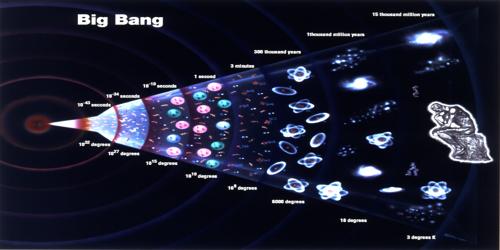 The Big Bang Theory is the foremost clarification about how the universe began. At its simplest, it says the universe as we know it started with a little spectacle, and then inflated over the next 13.8 billion years to the cosmos that we know at present.

Evidence for the Big Bang includes:

These two features are found in explosions – the fastest moving objects end up furthermost away from the explosion. The Big Bang Theory considers the following stages in the development of the universe.

(i) In the beginning, all matter forming the universe existed in one place in the form of a “tiny ball’ (singular atom) with an unimaginably small volume, infinite temperature and infinite density.

(ii) At the Big Bang the ‘tiny ball’ exploded violently. This led to a huge expansion. It is now generally accepted that the event of big bang took place 13.7 billion years before the present. The expansion continues even to the present day. As it grew, some energy was converted into matter. There was particularly rapid expansion within fractions of a second after the bang. Thereafter, the expansion has slowed down. Within first three minutes from the Big Bang event, the first atom began to form.

(iii) Within 300.000 years from the Big Bang, temperature dropped to 4.500 K and gave rise to atomic matter. The universe became transparent.

The expansion of universe means increase in space between the galaxies. An alternative to this was Hoyle’s concept of steady state. It considered the universe to be roughly the same at any point of time. However, with greater evidence becoming available about the expanding universe, scientific community at present favors argument of expanding universe.