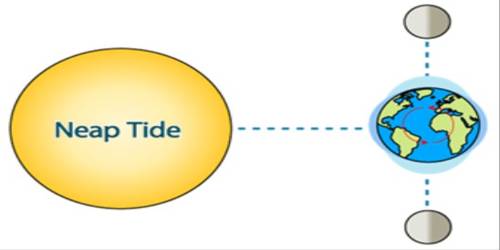 Neap Tide: Tide that occurs every 14 – 15 days and coincides with the first and last quarter of the moon. This tide has a small tidal range because the gravitational forces of the moon and sun are perpendicular to each other. It is a tide just after the first or third quarters of the moon when there is the slightest dissimilarity between high and low water. 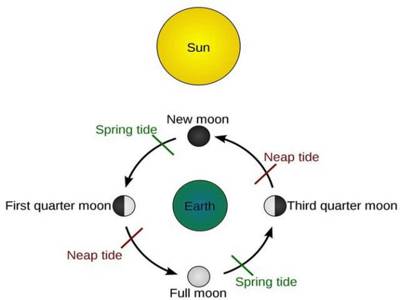 Neap tides happen at about the similar interval after the first or last quarter of the Moon. The time distance between consecutive spring and neap tides is changeable, but for realistic purposes, it can be taken as being about 7 1/2 days (i.e. about one-quarter of the average lunar month of 29.5 days). Seven days after a spring tide, the sun and moon are at right angles to each other. When this occurs, the bulge of the ocean caused by the sun partly cancels out the bulge of the ocean caused by the moon. This produces reasonable tides known as neap tides, meaning that high tides are a little lower and low tides are a slightly higher than standard. Neap tides happen during the first and third quarter moon when the moon appears “half full.”