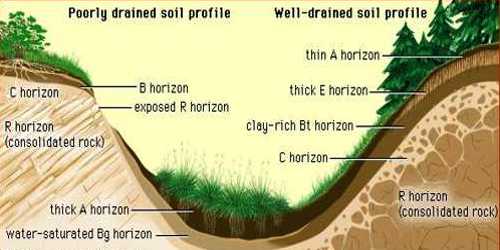 The climatic dements involved in soil development are:

(i) moisture in terms of its intensity, frequency, and duration of precipitation – evaporation, and humidity;

(ii) the temperature in terms of seasonal and diurnal variations.

Temperature directly influences the speed of chemical reactions. Precipitation gives soil it’s moisture content which makes the chemical and biological activities possible. Excess of water helps in the downward transportation of soil components through the soil (eluviations) and deposits the same down below (alleviation). In climates like wet equatorial rainy areas with high rainfall, not only calcium, sodium, magnesium, potassium etc. but also a major part of silica is removed from the soil. Removal of silica from the soil is known as desalination. In dry climates, because of high temperature, evaporation exceeds precipitation and hence groundwater is brought up to the surface by capillary action and in the process, the water evaporates leaving behind salts in the soil. Such salts form a crust in the soil known as hardpans. In tropical climates and in areas with intermediate precipitation conditions, calcium carbonate nodules (Kanker) are formed.

Temperature acts in two ways — increasing or reducing chemical and biological activity. Chemical activity is increased at higher temperatures, reduced in cooler temperatures (with an exception of carbonation) and stops in freezing conditions. That is why, tropical soils with higher temperatures show deeper profiles, and in the frozen tundra regions soils contain largely mechanically broken materials.