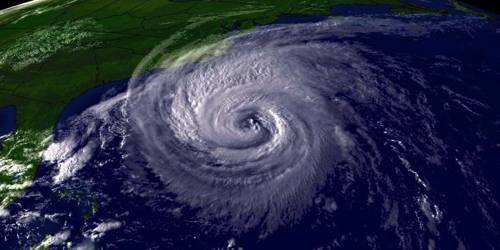 Tropical cyclones are violent storms that originate over oceans in tropical areas and move over to the coastal areas bringing about the large-scale destruction caused by violent winds, very heavy rainfall, and storm surges. This is one of the most devastating natural calamities. They are known as Cyclones in the Indian Ocean, Hurricanes in the Atlantic, Typhoons in the Western Pacific and the South China Sea, and Willy-willies in Western Australia.

Tropical cyclones originate and intensify over warm tropical oceans. The conditions favourable for the formation and intensification of tropical storms are;

(i) Large sea surface with the temperature higher than 27° C;

(ii) Presence of the Coriolis force;

The energy that intensifies the storm comes from the condensation process in the towering cumulonimbus clouds, surrounding the centre of the storm. With the continuous supply of moisture from the sea, the storm is further strengthened. On reaching the land the moisture supply is cut off and the storm dissipates. The place where a tropical cyclone crosses the coast is called the landfall of the cyclone. The cyclones, which cross 20° N latitude generally, recurve and they are more destructive. 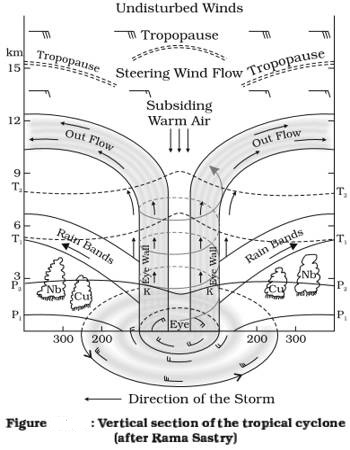 The eye is a region of calm with subsiding air. Around the eye is the eyewall, where there is a strong spiralling ascent of air to a greater height reaching the tropopause. The wind reaches maximum velocity in this region, reaching as high as 250 km per hour. Torrential rain occurs here. From the eyewall, rain bands may radiate and trains of cumulus and cumulonimbus clouds may drift into the outer region. The diameter of the storm over the Bay of Bengal, Arabian Sea, and Indian ocean is between 600 – 1200 km. The system moves slowly about 300 – 500 km per day. The cyclone creates storm surges and they inundate the coastal low lands. The storm peters out on the land.