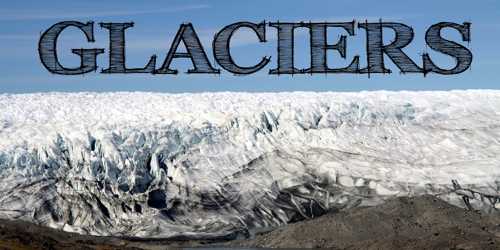 Glaciers are huge masses of ice that can take numerous forms, from enormous sheets to uneven blocks of slow-moving ice and rock. Masses of ice moving as sheets over the land (continental glacier or pidmont glacier if a vast sheet of ice is spread over the plains at the foot of mountains) or as linear flows down the slopes of mountains in broad trough-like valleys (mountain and valley glaciers) are called glaciers (Figure).

For billions of years, glaciers have carved the earth’s surface and fed rivers and oceans with water. Their presence is still felt even millions of years after melting away to create valleys, lakes and even mountains. The movement of glaciers is slow, unlike water flow. The movement could be a few centimeters to a few meters a day or even less or more. Glaciers move basically because of the force of gravity. 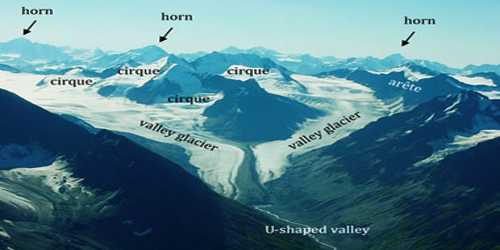 Erosion by glaciers is tremendous because of friction caused by sheer weight of the ice. The material plucked from the land by glaciers (usually large-sized angular blocks and fragments) get dragged along the floors or sides of the valleys and cause great damage through abrasion and plucking. Glaciers can cause significant damage to even un-weathered rocks and can reduce high mountains into low hills and plains.

As glaciers continue to move, debris gets removed, divides get lowered and eventually the slope is reduced to such an extent that glaciers will stop moving leaving only a mass of low hills and vast outwash plains along with other depositional features.