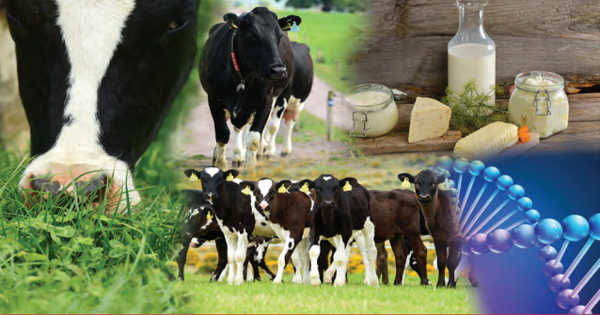 Too much milk is discarded, which was a problem long before the current pandemic of global food insecurity. According to U.S. Department of Agriculture data from the previous decade, one out of every three gallons of milk in America was estimated to go to waste. A group of scientists, one of whom is now at Washington University in St. Louis, used mathematical models to integrate knowledge from multiple disciplines—milk production and processing, microbiology, and supply chain—in order to address a centuries-old problem: spoiled milk.

Their research discovered two major strategies that could be used at the beginning of the milk supply chain—on the farm and in the processing plant—to prevent psychrotolerant (cold-growing,) spore-forming bacteria from contaminating and spoiling milk:

Their research, which concluded that implementing both strategies could increase milk shelf life by a half-day to 13 days, was published on July 8 in one of the Frontiers journals, Frontiers in Sustainable Food Systems.

“In general, I would say that this is not a one-size-fits-all problem,” said Forough Enayaty Ahangar, a new supply chain optimization lecturer at the Olin Business School. “Our optimization models’ results show that the optimal combination of interventions is highly dependent on the characteristics of each individual dairy processor. These characteristics include the amount of processed milk and the quality of the raw milk supplied. As a result, our optimization models offer novel decision tools that individual processors can use to determine the best strategy for their facility.”

Bottles of milk sit at the intersection of food science, population and veterinary medicine, and supply chain, causing a global problem the longer they sit. So Enayaty Ahangar collaborated with researchers from her previous institution, Cornell University, including Sarah Murphy, Nicole Martin, Martin Wiedmann, and senior author Renata Ivanek, to test the strategies using modeling.

This study focused on the problem of milk spoilage caused by bacteria such as Bacillus sp. and Paenibacillus sp., which enter raw milk on farms and produce hardy spores that can withstand pasteurization. (There is an alternative pasteurization method, but it is more expensive, and consumers complain about the taste of the milk after it has been subjected to the higher temperatures used.)

Comparing their findings to Agriculture Department data from 24 states and based on a cow producing 64 pounds or 15 half-gallons of milk per day, the team ran 24 case studies—or generated instances, as they called them—looking at processor size, the number of milk producers in the supply chain, and the planning horizon, which they defined as five to ten years in the future.

Farmers should be encouraged to implement fixes and improve processes from the start, beginning with milk from the cow’s udders if they are rewarded for consistent high-quality milk in terms of spore-forming spoilage bacteria contamination and penalized for low-quality milk.

Contracts similar to this bonus/penalty guideline are already in place in U.S. livestock commodities such as eggs and chicken, according to the authors. The researchers propose a new, flexible bonus/penalty system based solely on raw milk’s initial spore counts at production in this paper.

Investing in spore reduction or intervening at the processing level: Companies that process milk are aware that technologies such as microfiltration and bactofugation are expensive to acquire, install, and operate. However, this study demonstrated that using both of those approaches, as well as a third, double-bactofugation method, were the most effective long-term ways to eliminate spore-forming bacteria from milk.

Their models predicted that by implementing such processing-level interventions and investments, milk shelf lives would improve across the board. This increased shelf life—defined as the first day when 5% of milk packages contain a specific bacterial count—ranged from 20-26 days (for small processing plants) to 28-31 days (medium), with an average of 34 days (large).

“The dairy industry is paying increasing attention to the importance of using low spore count raw milk to produce high-quality dairy products, but there is no blueprint for industry decision-makers on how to achieve this,” Murphy said. “Most importantly, our study adds to the conversation about how the industry can invest in dairy farmers and technologies, and it provides tools that may be useful to industry decision-makers.”

“Our main focus was on how the process could better allocate their budget to achieve a longer shelf life for their processed milk,” Enayaty Ahangar explained. In short, the study found that medium and large processors could implement interventions to increase the shelf life of their milk by up to 13 and 12 days, respectively.

“The ultimate goal of our research is to support the development of a sustainable milk production supply chain in which milk waste is reduced in a way that is cost-effective for all players in the food production and consumption continuum, as well as socially acceptable and environmentally sound,” Ivanek explained. “The decision support tools developed through the multidisciplinary research effort in this study, such as the mathematical models of milk spoilage, are an integral part of that journey.”

“This project continues the development of digital tools for both dairy and other food supply chains that will play an important role as decision support tools for industries as they continue to improve productivity and sustainability of nutritious foods,” Wiedmann added.

What is Corporate Governance?