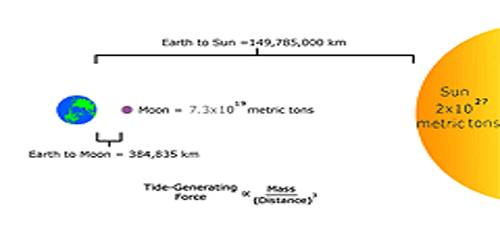 The ‘tide-generating’ force is the difference between these two forces: i.e. the gravitational attraction of the moon and the centrifugal font. On the surface of the earth, nearest the moon, pull or the attractive force of the moon is greater than the centrifugal force, and so there is a net force causing a bulge towards the moon. On the opposite side of the earth, the attractive force is less, as it is farther away from the moon, the centrifugal force is dominant. Hence, there is a net force away from the moon. It creates the second bulge away from the moon. On the surface of the earth, the horizontal tide-generating forces are more important than the vertical forces in generating the tidal bulges. 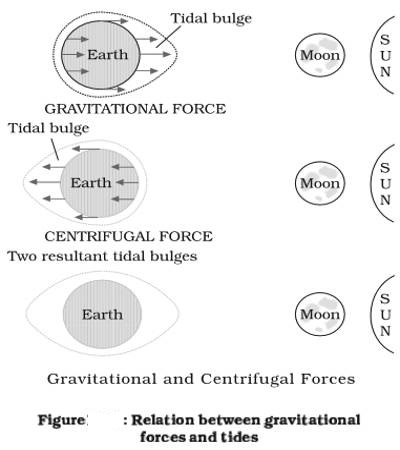 The tidal bulges on wide continental shelves have a greater height. When tidal bulges hit the mid-oceanic islands they become low. The shape of bays and estuaries along a coastline can also magnify the intensity of tides. Funnel-shaped bays greatly change tidal magnitudes. When the tide is channeled between islands or into bays and estuaries they are called tidal currents. Tidal currents occur in conjunction with the rise and fall of the tide. The vertical motion of the tides near the shore causes the water to move horizontally, creating currents.