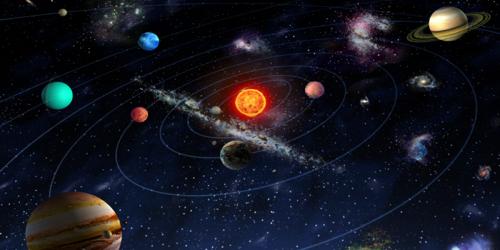 Our Solar system consists of nine planets. The tenth planet 2003 UB313 has also been recently sighted. The nebula from which our Solar system is supposed to have been formed, started its collapse and core formation some time 5-5.6 billion years ago and the planets were formed about 4.6 billion years ago. Our solar system consists of the sun (the star), 9 planets, 63 moons, millions of smaller bodies like asteroids and comets and huge quantity of dust-grains and gases.

Out of the nine planets, Mercury, Venus, Earth and Mars are called as the inner planets as they lie between the sun and the belt of asteroids the other five planets am called the outer planets. Alternatively, the first four are called Terrestrial, meaning earth-like as they are made up of rock and metals, and have comparatively high densities. The rest five am called Jovian or Gas Giant planets. Jovian means Jupiter-like. Most of them are much bigger than the terrestrial planets and have thick atmosphere, mostly of helium and hydrogen. All the planets were formed in the same period sometime about 4.6 billion years ago. Some data regarding our solar system are given in the box below.

The difference between terrestrial and Jovian planets can be attributed to the following conditions:

(ii) The solar wind was most intense nearer the sun; so, it blew off lots of gas and dust from the terrestrial planets. The solar winds were not all that intense to cause similar removal of gases from the Jovian planets.

(iii) The terrestrial planets are smaller and their lower gravity could not hold the escaping gases.