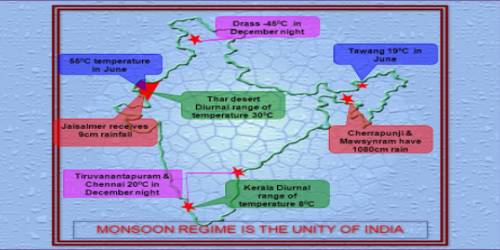 Unity and Diversity in the Monsoon Climate in Indian Subcontinent

The monsoon regime emphasizes the unity of India with the rest of Southeast Asian region. This view of the broad unity of the monsoon type of climate should not, however, lead one to ignore its regional variations which differentiate the weather and climate of different regions of India. For example, the climates of Kerala and Tamil Nadu in the south are so different from that of Uttar Pradesh and Bihar in the north, and yet all of these have a monsoon type of climate.

India has four basic seasons: winter in January and February, summer from March through May, monsoon season from June through September, and an after monsoon period from October through December. The climate of India has many regional variations expressed in the pattern of winds, temperature, and rainfall, rhythm of seasons and the degree of wetness or dryness. These regional diversities may be described as sub-types of monsoon climate. Let us take a closer look at these regional variations in temperature, winds, and rainfall. While in the summer the mercury occasionally touches 55°C in the western Rajasthan, it drops down to as low as minus 45°C in winter around Left Chum in Rajasthan may record a temperature of 50°C or more on a June day while the mercury hardly touches 19°C in Tawang (Arunachal Pradesh) on the same day. On a December night, a temperature in Drass (Jammu and Kashmir) may drop down to minus 45°C while Tiruvanantapuram or Chennai on the same night records 20°C or 22°C. These examples confirm that there are seasonal variations in temperature from place to place and from region to region in India. Not only this. if we take only a single place and record the temperature for just one day, variations are no less striking. In Kerala and in the Andaman Islands, the difference between day and night temperatures may be hardly seven or eight degree Celsius. But in the Thar Desert, if the day temperature is around 50°C at night, it may drop down considerably upto 15°-20°C.