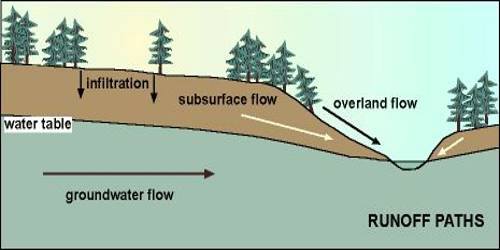 In the water cycle, when precipitation falls on the earth’s ground, some of the water flows on the surface forming streams and rivers. The leftover water, through permeation, penetrates the soil traveling underground, hydrating the vadose zone soil, recharging aquifers, with the surplus flowing in the subsurface runoff. In hydrogeology, it is calculated by the Groundwater flow equation. 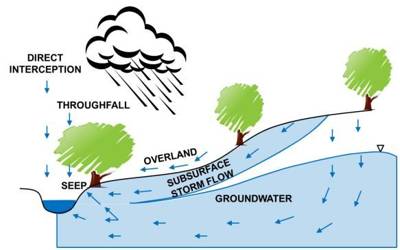 Subsurface flows in water-bearing formations have a drainage competence slower than surface flows, but faster than groundwater flows. The necessary situation for the emergence of the subsurface flows is: the hydraulic lateral conductivity of the environment has to be greater to the perpendicular conductivity. The subsurface flow in unsaturated regimes can be the base flow in the region with large slopes, and it is leading in humid regions with vegetal covering and well-drained soils.