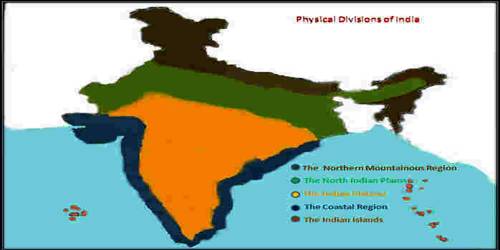 Physiography of an area is the outcome of structure, process and the stage of development. The land of India is characterized by great diversity in its physical features. The north has a vast expanse of rugged topography consisting of a series of mountain ranges with varied peaks, beautiful valleys, and deep gorges. The south consists of stable table land with highly dissected plateaus, denuded rocks, and developed series of scarps. In between these two lies the vast north Indian plain. 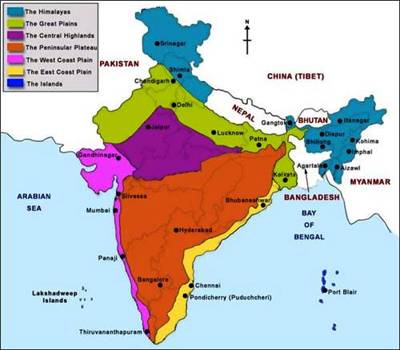 India is geographically very rich and diverse country. It has the entire physiogeographic features one expect in a country. Based on these macro variations, India can be divided into the following physiographic divisions:

(i) The Northern and Northeastern Mountains: The main mountain of the north is the Himalaya.It is about 2400KM long and covers Kashmir to Arunachal Pradesh.

(ii) The Northern Plain: It is located between the great northern mountain and peninsular plateau. This plain is formed by the three major rivers – Ganges, Indus, Brahmaputra and their tributary rivers.

(iii) The Peninsular Plateau: It lies to the south of northern plain. The average height of this plateau is 600-900 Metre. The highest peak of peninsular India is Anamudi (2695 Metre) of Kerala.

(iv) The Indian Desert: India’s only desert is the Thar desert. The larger part of this desert lies in the Indian state Rajasthan. Some portion of this dessert is spread into Gujarat, Haryana, Punjab, and Pakistan.

(vi) The Islands: India has two groups of islands – Andaman and Nicobar, Lakshadweep.