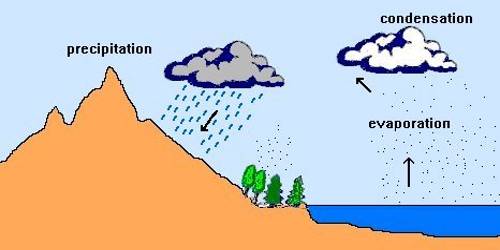 The transformation of water vapor into water is called condensation. Condensation is caused by the loss of heat. When moist air is cooled, it may reach a level when its capacity to hold water vapor ceases. Then, the excess water vapor condenses into liquid form. If it directly condenses into solid form, it is known as sublimation. In free air, condensation results from cooling around very small particles termed as hygroscopic condensation nuclei. Particles of dust, smoke, and salt from the ocean are particularly good nuclei because they absorb water. Condensation also takes place when the moist air comes in contact with some colder object and it may also take place when the temperature is close to the dew point. Condensation, therefore, depends upon the amount of cooling and the relative humidity of the air. Condensation is influenced by the volume of air, temperature, pressure, and humidity. Condensation takes place:

(i) when the temperature of the air is reduced to dew point with its volume remaining constant;

(ii) when both the volume and the temperature are reduced;

(iii) when moisture is added to the air through evaporation.