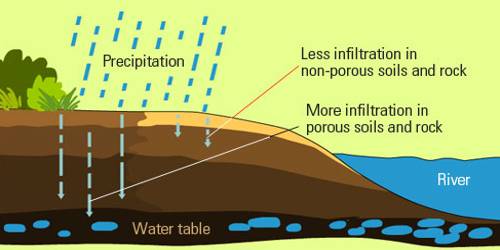 Infiltration: A portion of the precipitation which reaches the earth surface seeps into the ground in the permeable strata. This process is known as infiltration. It is the downward movement of water through the land surface. Infiltration is the procedure by which rainfall or water soaks into subsurface soils and moves into rocks through cracks and pore spaces. 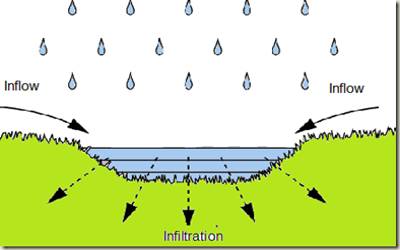 Infiltration rate in soil science is determined by the rate at which soil is able to soak up rainfall or irrigation. It is calculated in inches per hour or millimeters per hour. The rate reduces as the soil becomes soaking wet. It is reasoned by two forces: gravity and capillary action. While lesser pores offer bigger conflict to gravity, very little pores pull water through capillary action in addition to and even in opposition to the force of gravity.