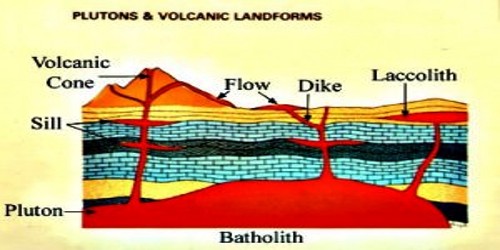 Volcanic landforms are controlled by the geological processes that form them and act on them after they have formed. Volcanic eruptions pull materials up from deep within the earth to form various volcanic landforms, such as lava domes, lava plateaus, fissure eruptions, craters, and calderas.

The lava that is released during volcanic eruptions on cooling develops into igneous rocks. The cooling may take place either on reaching the surface or also while the lava is still in the crustal portion. Depending on the location of the cooling of the lava, igneous rocks are classified as volcanic rocks (cooling at the surface) and plutonic rocks (cooling in the crust). The lava that cools within the crustal portions assumes different forms. These forms are called intrusive forms. Some of the forms are shown in Figure. 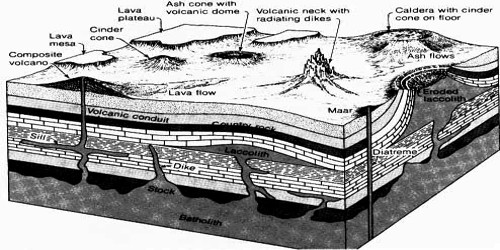 A large body of magmatic material that cools in the deeper depth of the crust develops in the form of large domes. They appear on the surface only after the denudation processes remove the overlying materials. They cover large areas, and at times, assume depth that may be several km. These are granitic bodies. Batholiths are the cooled portion of magma chambers.

These are large dome-shaped intrusive bodies with a level base and connected by a pipe-like conduit from below. It resembles the surface volcanic domes of the composite volcano, only these are located at deeper depths. It can be regarded as the localized source of lava that finds its way to the surface.

When the lava makes its way through cracks and the fissures developed in the land, it solidifies almost vertical to the ground. It gets cooled in the similar position to extend a wall-like structure. Such structures are called dikes. These are the most commonly found intrusive forms in the western Maharashtra area.

Monsoons and the Economic Life in India Subcontinent