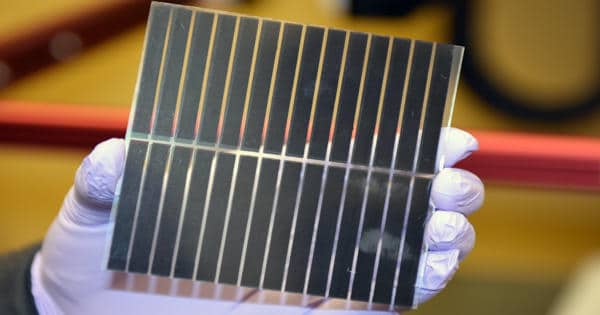 The Sun emits enough power onto Earth each second to satisfy the entire human energy demand for over two hours. Given that it is readily available and renewable, solar power is an attractive source of energy. A young researcher at FAU develops a system for increasing the efficiency of organic solar cells. As part of his doctoral thesis, a young scientist at the Friedrich-Alexander University of Erlangen-Nuremberg has devised a way to make organic solar cells more efficient.

Organic solar cells are cheaper to produce and more flexible than their counterparts made of crystalline silicon but do not offer the same level of efficiency or stability.

Particularly in view of the increasingly rapid increase in global warming, renewable energies will play an ever-greater role in the future. Organic solar cells are cheaper to produce and more flexible than their counterparts made of crystalline silicon but do not offer the same level of efficiency or stability. During his doctoral thesis, Andrej Classen, who is a young researcher at FAU, demonstrated that efficiency can be increased using luminescent acceptor molecules. His work has now been published in the journal Nature Energy.

Although the sun can provide a solar energy output of around 1,000 watts per square meter under cloudless skies in our geographical climes, the monocrystalline silicon solar cells commonly available on the market only convert up to around 20 % of this into electricity. Prof. Brabec’s working group has held the world record for efficiency in an organic photovoltaic module of 12.6% since September 2019. The multi-cell module developed at Energie Campus Nürnberg (EnCN) has a surface area of 26 cm². ‘If we can achieve over 20% in the laboratory, we could possibly achieve 15% in practice and become real competition for silicon solar cells,’ says Prof. Brabec. What’s more, organic solar cells have also been less stable so far, but on the other hand, they are superior to those made of crystalline silicon in some respects. They are cheaper to manufacture and can be used more flexibly.

The advantages of organic solar cells are obvious – they are thin and flexible like foil and can be adapted to fit various substrates. The wavelength at which the sunlight is absorbed can be ‘adjusted’ via the macro modules used. An office window coated with organic solar cells that absorbs the red and infrared spectrum would not only screen out thermal radiation but also generate electricity at the same time. One criterion that is becoming increasingly important in view of climate change is the operation period after which a solar cell generates more energy than was required to manufacture it. This so-called energy payback time is heavily dependent on the technology used and the location of the photovoltaic (PV) system.

Loss of performance for charge separation

Compared with a ‘traditional’ silicon solar cell, its organic equivalent has a definite disadvantage: Sunlight does not immediately produce charge for the flow of current, but rather so-called excitons in which the positive and negative charges are still bound. ‘An acceptor that only attracts the negative charge is required in order to trigger charge separation, which in turn produces free charges with which electricity can be generated,’ explains Dr. Heumüller. A certain driving force is required to separate the charges. This driving force depends on the molecular structure of the polymers used. Since certain molecules from the fullerene class of materials have a high driving force they have been the preferred choice of electron acceptors in organic solar cells up to now. In the meantime, however, scientists have discovered that a high driving force has a detrimental effect on the voltage. This means that the output of the solar cell decreases, in accordance with the formula that applies to direct current – power equals voltage times current.

Increase in performance with certain molecules

The measurement results provided the proof for a theory already assumed in research – a ‘Boltzmann equilibrium’ between excitons and separated charges, the so-called charge transfer (CT) states. ‘The closer the driving force reaches zero, the more the equilibrium shifts towards the excitons,’ says Dr. Larry Lüer who is a specialist for photophysics in Brabec’s working group. This means that future research should concentrate on preventing the exciton from decaying, which means increasing its excitation ‘lifetime’.