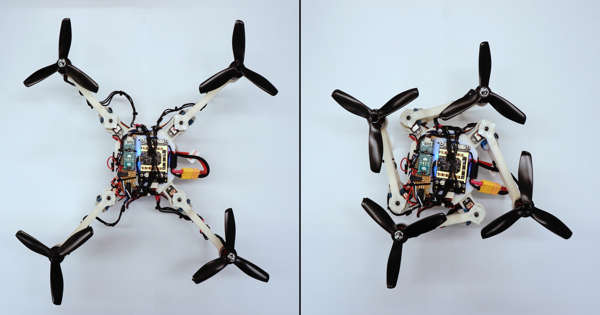 When an aircraft veers too far upwards, the decrease in lift and increase in drag may cause the vehicle to plummet unexpectedly. This phenomenon, known as a stall, has led many drone manufacturers to err on the side of extreme caution when planning their vehicles’ autonomous flight movements.

Most manufacturers program vertical takeoff and landing tail-sitter drones so that the vehicle body turns very slowly whenever it transitions from hover to forward flight and vice versa.

The Army Research Laboratory of the United States Army Combat Capabilities Development Command, now known as DEVCOM, collaborated with researchers at Rensselaer Polytechnic Institute to develop a trajectory planner that significantly reduces the time it takes for VTOL tail-sitter drones to make this critical transition.

The trajectory planner was created specifically for the Army’s Common Research Configuration platform, which is a quadrotor biplane tail-sitter used to test new design features and study fundamental aerodynamics.

When an aircraft veers upwards too much, the decrease in lift and increase in drag may cause the vehicle to suddenly plummet. Known as a stall, this phenomenon has prompted many drone manufacturers to err on the side of extreme caution when they plan their vehicles’ autonomous flight movements.

“The goal of this work was to use a model-based trajectory planner that could sufficiently capture the quadrotor’s dynamic characteristics while executing quickly enough to provide trajectories in-flight,” explained Dr. Jean-Paul Reddinger, Army aerospace engineer at the laboratory’s Vehicle Technology Directorate. “Essentially, we’re incorporating a kinesthetic model of the aircraft’s own dynamics that it can refer to.”

VTOL tail-sitters, according to Reddinger, typically use a heuristic-based approach when transitioning between hover and forward flight, where they follow a very slow but very safe predetermined set of actions. In contrast, the trajectory planner can determine the best sequence of flight movements for these transitions based on the circumstances.

When researchers modeled the unique interaction between the wake of the vehicle’s rotors and the aerodynamics of its wings, they discovered the availability of these more agile maneuvers. “If this vehicle is hovering, the wings are pointed upwards, and the rotors are constantly spinning above it; if you wanted to start moving it forward, you’d be dragging this wing effectively flat against the air,” Reddinger explained. “You’d think this would cause a lot of drag, but due to the air being blown down onto the wing, it’s actually not seeing a lot of drag.”

Because of the extra downwash from the rotors, VTOL tail-sitters can handle a more aggressive transition between hover and forward flight than one might expect, according to Reddinger. The researchers discovered that incorporating rotor on wind wake interference into the trajectory planner allowed the CRC to transition into hover and land in half the time of the conventional approach.

The team believes that the trajectory planner will eventually enable the CRC to intelligently switch between hover and forward flight while navigating dense or urban areas. “Right now, it’s in a state where you give it the initial state that you want — maybe you have a specific altitude or velocity that you want to start at — and it will plot a path that gets you from that initial state to the desired final state as efficiently as possible,” Reddinger explained. “We’re trying to take this in a direction where we can incorporate obstacles and other types of constraints on its maneuverability.”

Reddinger compared the CRC’s autonomous behavior to that of humans, and how knowing our own capabilities allow us to move from one location to another efficiently. Similarly, including more sophisticated flight models in the trajectory planner will give the CRC a better understanding of the complex aerodynamic environment as it moves.

“For example, if there’s a building in the way, does it make more sense to fly over it or around it?” Reddinger inquired. “Do you want to transition to speed and then back, or do you want to stay in hover mode? There are several options, and the goal is to always choose the best one.”

After more simulation trials, the researchers intend to connect the software to hardware models to ensure a high level of robustness before beginning flight tests.

Reddinger believes that a faster, more efficient transition from hover to forward flight will eventually aid the Army in the development of new vehicles for intelligence, surveillance, and reconnaissance missions, as well as aerial resupply operations.

“In order to capitalize on the flight capabilities of novel configurations, we need autonomous pilots capable of maximizing the agility and performance that these aircraft are designed to allow,” Reddinger said. “This model-based trajectory planning method is a step toward integrating high-level autonomy with platform-specific dynamics.”