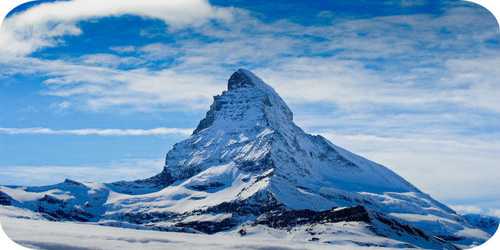 Horns form through headward erosion of the cirque walls. If three or more radiating glaciers cut headward until their cirques meet, high, sharp-pointed and steep-sided peaks called horns form. A glacial horn is a character created by glaciers and what accurately this term means is intricately linked with how it formed. A horn is a peak that forms from three arêtes. It is also known as a pyramidal peak. 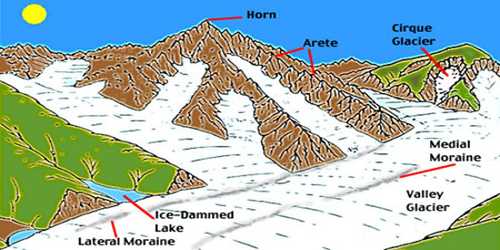 A horn results when glaciers erode three or more arêtes, usually forming a sharp-edged peak. Cirques are concave, circular basins carved by the base of a glacier as it erodes the landscape. A ridge or mountain ridge is a geological feature consisting of a chain of mountains or hills that form a continuous elevated crest for some distance. The divides between Cirque side walls or headwalls get narrow because of progressive erosion and turn into serrated or saw-toothed ridges sometimes referred to as aretes with very sharp crest and a zig-zag outline. Ridges are usually termed hills or mountains as well, depending on size.

Is it essential to distinguish Geomorphic Agents and Geomorphic Processes?