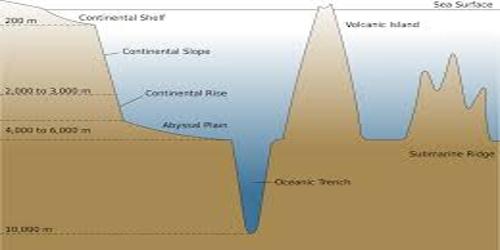 The continental shelf is the extended margin of each continent occupied by relatively shallow seas and gulfs. It is the shallowest part of the ocean showing an average gradient of 1° or even less. The shelf typically ends at a very steep slope, called the shelf break.

The widths of the continental shelves vary from one ocean to another. The average width of continental shelves is about 80 km. The shelves are almost absent or very narrow along some of the margins like the coasts of Chile, the west coast of Sumatra, etc. On the contrary, the Siberian shelf in the Arctic Ocean, the largest in the world, stretches to 1,500 km in width. The depth of the shelves also varies. It may be as shallow as 30 m in some areas while in some areas it is as deep as 600 m. 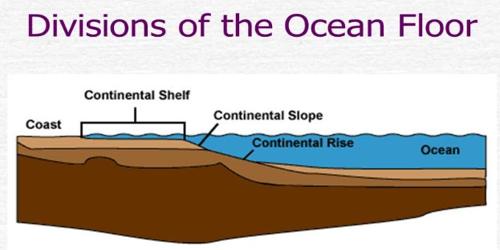 Deep sea plains are gently sloping areas of the ocean basins. These are the flattest and smoothest regions of the world. The depths vary between 3,000 and 6,000m. These plains are covered with fine-grained sediments like clay and silt.

These areas are the deepest parts of the oceans. The trenches arc relatively steep-sided, narrow basins. They are some 3-5 km deeper than the surrounding ocean floor. They occur at the based of continental slopes and along island areas and are associated with active volcanoes and strong earthquakes.